This past week I was both honored and humbled to be featured on a blog regarding my personal philosophy on success and failure (That blog post is below as it appeared on March 4, 2010). And, the fact that it was featured by Ky Ekinci, Co-Founder of Office Divvy makes it that much more special!

You see, Ky and his partners understand SUCCESS. In 2007, they created Office Divvy in Palm Coast, Florida. Office Divvy is a cost effective, comfortable, and professional work and meeting space for all profiles in the business community. They deliver a turnkey business operation, to work-from-home professionals; corporations; individuals or companies that are starting up or downsizing; allowing these companies to concentrate on their core business objectives instantly.

Ky and his partners are the true economic developers! Economic developers that are helping small business to grow and prosper. In addition, Ky and his partners have adopted social network tools such as Twitter to reach out to a larger audience and help small business and entrepreneurs to SUCCEED. And, they impart great wisdom to those that follow, unselfishly, one Tweet at a time!

You can check out Office Divvy at:

http://blog.officedivvy.com/
Or you can folllow Ky Ekinci on Twitter at:

I've noticed Randy Seitz on twitter early on, and we made an immediate connection. He is a terrific and experienced Economic Development Executive with a diverse background and an impressive track record.

A couple days ago, Randy was on twitter, skillfully engaging others while machine-gunning a bunch of powerful quotes on "failure."

Last Summer I posted a short blog entry on "Success and Failure" based on a video interview of another Randy -- the Entrepreneur and Venture Capitalist, Randy Komisar. Mr. Komisar was arguing that it is the tolerance for failure that leads to innovation, and hence a solopreneur, a small business owner, a startup are more likely to be innovative (because they can tolerate failure) vis a vis a large corporation. That blog post, and the video interview can be found here: Biggest Success Breeds from Failure

There has been much said, and there is much to say about Success, Failure, and Innovation, but I will not say more. I will instead leave you with some of Randy Seitz's quotes through his wonderful tweets: 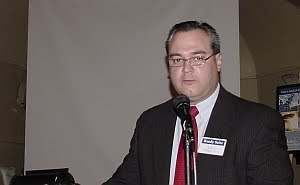 " I am one more failure away from greatness! "

...and when I made a comment to Randy about him being on a roll with his great quotes on failure, he responded with yet another gem:
" ...breaking past the fear of failure is where you will find true success! "

If you are on twitter, you can connect with Randy: @RPSeitz
Posted by Randy P. Seitz at 5:45 AM

Should Nonprofit Organizations Create For Profit Ventures For Sustained Growth Or Continue To Rely Solely On Small Business For Support?

Do you feel that you have achieved a good work-life balance?

How often does your organization go through a strategic planning process?

What is the perfect size of a functional board of directors?

Should you allow non-board members to sit on your committees and task forces?

Should the board chair allow discussion of items that are not on the agenda?

If a board member has missed 4 out of 12 monthly meetings should they be dismissed from the board?

If you serve as a board member of a nonprofit agency; how many board meetings is it OK to miss?

If a board meeting is going to be productive, how long should it be?

People often try to justify good reasons for "Little White Lies." Is it ever OK to tell a lie?

Which core values are most important for an organization? (Choose your top 3)

Should your sales team be empowered to provide discounts to close the deal?

Should the government provide free universal health care for all americans?

How Many Books Do You read Per Month?

Remember when we were kids and we made a mistake we got a do over? Well, if we had a do over for the Presidential Election who would you vote for?

Do you think that social media or Web 2.0 platforms can be used to boost productivity?

Should a nonprofit agency create a for profit division in order to become self-sufficient and continue to serve the community while not being a burden on that community?

Should mentors be paid for their time and advice?

If A Board Member is a Difficult and Negative Individual; Clearly Working Against The Mission of The Agency, Should That Board Member Be Removed?

Should The Board of Directors of A Nonprofit Organization Take An Active Role in Fundraising?